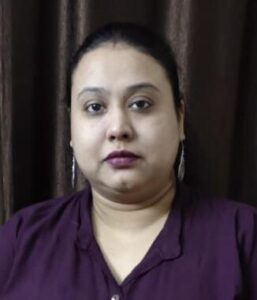 Dr. Pooja Tiwari is a strong believer of academic development in the field of Physiotherapy and she works tirelessly for the same. She has always focused on her own academic development as well so she can successfully guide the future generations. She always favored academic side of Physiotherapy profession as she believes that we need to train young students and professionals for the strong foundation of our field and their future.

She completed her schooling from Ingraham Institute English School, Ghaziabad (I.C.S.E. Board). She briefly trained and played Baseball at her school and later played in the U.P. team at National level of Baseball held in 2001. She then proceeded to do her Bachelor of Physiotherapy from the prestigious Santosh Medical College, Ghaziabad and later completed her Masters of Physiotherapy form the same college in the field of Cardiopulmonary.

She has various publications and is still trying to develop herself academically. She has an experience of more than six years in academic field. She worked as assistant professor/H.O.D. in A.I.E.R., Ghaziabad and currently working in Santosh Medical College, Ghaziabad.

She also works part time in self owned clinic with her husband who shares the same academic qualifications as her own. She is working as a part time clinician for last nine years.

While teaching she strives to impart the knowledge in the most easily understandable way possible, she firmly believes in saying that “If you can’t explain it simply you don’t understand it well enough”. Thus she makes sure to impart as much knowledge in as simple was as possible to her students.

She has a very strong love of books and an avid reader of books related to medical science as well as various other genres as well which ultimately contributes to knowledge because she believes that the day you didn’t learn something is a day wasted. She wants to entice her students to follow in her footsteps.