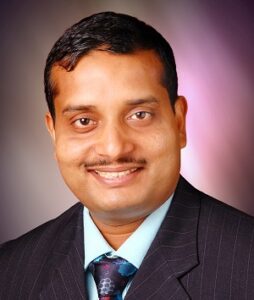 He has Completed his Bachelors degree in Physiotherapy from Swami Vivekanand  National Institute of Rehabilitation Training and Research, Cuttack, Orissa and  completed Masters In Manipulative Therapy from Manipal College of Allied Health Sciences, Manipal. He has completed PhD from Mangalore University in 2012. He has been trained under faculties of Loma Linda University( USA), Orthopedic Medicine International ( Belgium), University of Queensland(Australia), Charted Society of Physiotherapy (UK), British College of Osteopathic Medicine(London) and  McConnell’s Institute(Australia).

He is serving as PhD Guide of  Lovely Professional University, Phagwara, Punjab and University of Science and Technology, Meghalaya. He is PhD evaluator of Amity University and Pravara Institute of Medical Sciences ( Deemed to be University), Loni.

So far he has trained and shared the broad horizon of manipulative therapy to 25,325 Physiotherapists across the globe. The trained Physios are nationalities of India, Philippines, Jordan, Sudan, Saudi Arabia, Russia,Bangladesh, Dubai, Sharjah, Iran, Pakistan, Denmark, New Zealand, Sri Lanka, Korea, U.S.A and U.K. Hewas the Organising Chairman of 50th Golden Jubilee conference of The Indian Association of Physiotherapists held at  New Delhi from 16th-18th March, 2012. He also organized the 1st World Congress on Manual Therapy,2007(WCOMT07) at Mangalore as the Organising Secretary and the 2nd World Congress on Manual Therapy at Dhaka, Bangladesh,2009 (WCOMT09) on 17th and 18th April,2009 as the Organising Chairman with splendid and commendable success.

He has presented several research papers in Manual Therapy at National and Internatonal level conferences. He was Scientific Convenor for the IAP Conferences at Mangalore 2010 and Pune 2011.   I have several publications in the Journals and newspapers. He has authored two books “ Clinical Symposia in Manual Therapy” and “ Manual Therapy of the Pelvic Complex”. He has developed a new technique for the soft tissue palpation called as Mohanty Flat palpation grades. He was the editorial board member of Physiotimes magazine and regular contributor of the magazine.

He has vast experience of understanding various Govt policies, He was  Invited by Parliament of India (Rajya Sabha Secretariat) to present views regarding The NCHRH Bill ( National Commission for Human Resources for Health Bill, 2011 on 5th July,2012.

He was Invited by ICMR ( Indian Council of Medical Research) as an Expert to consider integration of Acupuncture to the practice of Physiotherapy on 11th Nov,2014.I had a great participation and many of my suggestions were incorporated.

He always believed in power of soft communication skill. He as a Teacher, Guide, leader and Association President always created comfortable work  environment augmented with proactiveness. He is inspired with simple Gandhian philosophy “Be and make”with self discipline, punctual and soothing Emotional Quotient.

His present focus of work is “ Physiotherapy Health for All” inspired with the United Nations Sustainable Development Agenda. His Inspiring Mantra of Life is      “ Bahujan Hitaya, Bahujan Sukhaya”  meaning  “ For Welfare of Many, Happiness of Many” .